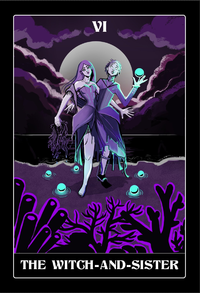 The Witch-and-Sister, also called The Twins, is one of the Hours, associated with hour VI, or 6:00am. She is the inverse of The Sister-and-Witch. Her Aspects are Grail, Moth and Heart, in that order.

The Twins are Gods-from-Flesh with a common origin. According to The Larquebine Codex, they "came from the West, where they were born in two wombs, one a princess, one a monster. Nevertheless they loved each other from birth, and met in secret 'to seek union'." The kings of their land attempted to sacrifice the princess and witch to end a drought, but they escaped across the sea before eventually despairing and drowning themselves. Thus, they entered the Mansus through The Painted River and the offices of The Red Grail, and became an Hour. Later, as explained by the mystic Brodnax in Those Who Do Not Sleep, The Red Grail grew jealous of The Twins' growing power and created The Thunderskin to counter them.

The Witch-and-Sister is connected with the book called The Geminiad, as well as the ancient language of Fucine, spoken by witches who lived in the vicinity of Lake Fucino in Italy. She fights wars with The Horned-Axe and seems to be in conflict with The Mother of Ants