The Door in the Eye

From Cultist Simulator Wiki
(Redirected from The Watchman)
Jump to: navigation, search 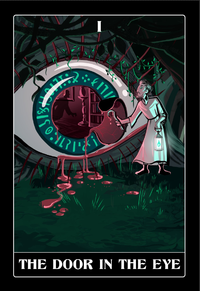 The Door in the Eye

The Door in the Eye, also called The Watchman, is one of the Hours, associated with hour I, or 1:00am. His Aspect is Lantern. The Watchman was formerly a mortal, most likely the Unwise Mortal described in The Manner In Which The Alchemist Was Spared. He was also, according to The Focus of Amber, formerly the Egg Unhatching. The most plausible reconciliation of these accounts is that the Unwise Mortal took up a remnant of the Egg which descended from the Glory after the Egg's flight. As a result, the Watchman is usually viewed as a God-from-Flesh due to having been mortal, sometimes viewed as a God-from-Light (The Focus of Amber and the Illuminate Mysteries differ) due to the descent of the remnant of the Egg, and occasionally seen as a God-from-Stone due to having been the Egg. The Watchman is preparing to lead a pilgrimage in which seven pilgrims will ascend into The Glory. The Vagabond will be the first of these pilgrims, but the remaining six positions are not yet certain.

The mortal origins of the Door-in-the-Eye are probably described in this passage: