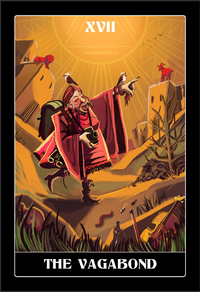 The Vagabond, also called The Centipede, The Laughingthrush, The Sight-Thief, The Pilgrim, and many other names, is one of the Hours, associated with hour XVII, or 5:00pm. Her Aspects are Moth and possibly Secret Histories. The Vagabond is a God-from-Flesh, and the only Hour who does not dwell in the Mansus.

According to The Book of Masks, The Vagabond was born in a place called Miah, where she was punished for entering its temple-precinct. Sometime after ascending to Hour-hood, she took her revenge on Miah as The Centipede by cursing it "to drink only dust and to be remembered only by the wind". As The Laughingthrush, she was a friend of The Sun-in-Splendour before his division. As The Sight-Thief, she created The Painted River in the Mansus. As The Vagabond, she has been barred from the Mansus for some incident that has yet to occur.

In Where Has She Gone?, it is claimed that The Vagabond has traveled all nine continents, the Mansus, the Wood, and places forbidden to other Hours. She has also already visited Nowhere and "will not return", yet her ultimate goal is to visit The Glory.

She will be the first of the seven pilgrims in the Watchman's Pilgrimage.