The Mother of Ants 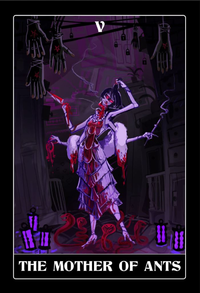 The Mother of Ants

The Mother of Ants, also called The Daughter of Venoms and The Key-Serpent, is one of the Hours, associated with hour V, or 5:00am. She is a God-from-Flesh, and may be a God-from-Blood, although no sources explicitly attest a Blood origin. Her Aspect is Knock. The Mother of Ants is said to be the child of two rivers, to have existed in Elam, and to have spoken Deep Mandaic, which means that she may have been a citizen of the Shadowless Empire in Mesopotamia. She looks kindly on wounds, and the ritual called A Consent of Wounds is invoked in her name. She also opposes The Witch-and-Sister and The Sister-and-Witch.

The Mother of Ants was originally a mortal priestess who assisted The Colonel in killing The Seven-Coils, a God-from-Stone. She is responsible for the Colonel's notable scarring and blindness, which were protections "from the Seven-Coiled's magics". After the slaying of Coil, she ascended via its blood. Sources disagree on the precise method of her ascension - the Colonel bathed her in its blood, or she drowned in it, or she arose from it. The Seven-Coils is also known as "The Father of the Mother" because her ascension was a product of his blood. Medusa's Lament describes a goddess with seven titles rising from The Seven-Coils' blood: "she is an armoured queen, a serpent-daughter, a key, a healer, a murderess, an oracle, but her seventh title is not to be revealed."

In pursuing the Priest Ascension, "The Seven-Coiled Vision" depicts a seven-branched wound, each with seven heads which are severed "by one who uses scars as weapons" referencing the slaying of the Seven-Coils by the Colonel. In this vision, St Agnes is handed the severed heads, representing her usurpation of the hour, suggesting she is the mortal priestess referenced in other literature and thus St Agnes was the mortal who became The Mother of Ants.

The Sevenfold Slaying of the Seven-Coiled

Deeds of the Scarred Captain