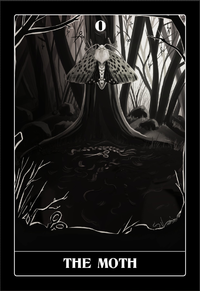 The Moth is one of the Hours, associated with hour 0, commonly known as 12:00am and midnight. His Aspect is Moth. By some accounts, The Moth was the very first God-from-Blood, but in others that honor went to The Red Grail.

The Moth offers an alternative path to immortality that does not require passing through the Tricuspid Gate of the Mansus. Instead, through pursuit of the temptation of change and veneration of the Moth aspect, an adherent may transform into an imperishable insect-like being and join The Moth in the Wood.

Moth and the Wheel[edit | edit source]

During the Lithomachy, the Moth usurped The Wheel, one of the Gods-from-Stone, "from within" and stole its skin, condemning it to Nowhere. Another account described by the lore fragment Thigh-Born Thorax-Sweet affirms this: "Vine-crowned moth-king hatched in the thigh of the thunder-king who's dead." There is also a saying that relates to The Moth, which may be relevant to this killing: "In the forests of the first continent, our ancestors cursed themselves with their own god."

The precise nature of the Moth's killing of Wheel is complicated by the Wildering Memory, obtained from the Holiest Hemolymph, which remembers "the hunt at which the Wheel was first brought to earth" and describes the Moth hunting. The description of the Hemolymph speaks of "an ancient crime" and asks, "Who will remember the barber's son?"