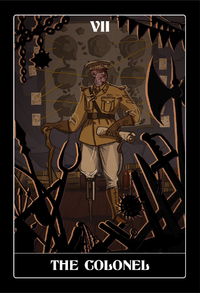 The Colonel, also called The Cartographer of Scars, The Tribune of Scars, The Scarred Captain, The Thousandman, and The Chiliarch, is one of the Hours, associated with hour VII, or 7:00am. His Aspects are Edge, Winter, and Lantern. He is notorious for being scarred all over his body, such that he is blind and deaf. This does not impair his lethality in the slightest; he is so potent that the other Hours appointed him to defend and maintain The Worm Museum, and his scars make him impossible to wound.

Later, he would tutor and be betrayed by The Lionsmith, setting off a rivalry that continues to this day.

The Colonel is mentioned in the book The Victory of Crowns as being the master of various cults of assassins who have hunted, killed, and consumed immortal beings throughout history. One of these was called the Tragulari, or more commonly the Dartsmen, and they were wiped out by the Troissant Company after the First Worm War in at least one History.

Crowkiss Hill contains the corpse of a heavily scarred warrior-king who was probably one of the Colonel's devotees.