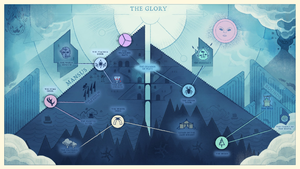 A map of the Mansus

The Mansus, or the House of the Sun, is a place or concept where the Hours dwell in the illumination of The Glory. Mortals can access the Mansus in spirit and traverse its five different Ways by Dreaming.

Mortals have classified the Mansus into three loosely-defined regions. The Wood is the lowest and darkest region, and the first place living mortals arrive at as it contains the first Way they pass through on their dreams. Above The Wood, but only just so, is The Bounds, which contains the second Way, The White Door, an aperture that denies speech to all who cross it, living or dead. Above The Bounds loom the pseudo-stone halls and passages of the Mansus proper, with access to its higher levels barred by three more Ways: The Stag Door, The Spider Door, and The Peacock Door. Beyond those lies one final barrier, The Tricuspid Gate, which leads to the summit of the Mansus. There, where The Glory's Light shines brightest, the Hours parley, and the greatest secrets of the world are curated, one can achieve enlightenment or immortality.

The Book of Dissolution describes an earlier incarnation of the Mansus with a different structure and doors. The Forge of Days reshaped the Mansus and opened the current Ways. According to The Concursum Diaries, the Mansus changes each year, but the Ways remain constant.

Here is the list of possible rewards by location: