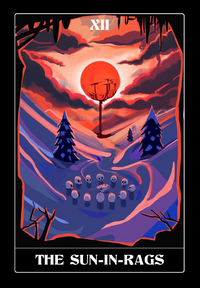 The Hours are the otherworldly god-like entities who dwell in the Mansus, and each governs a single hour of the day. However, while there are 24 hours in a day, there are 30 extant Hours. The Hours each have their own drives and spheres of interest, and often oppose each other where their machinations conflict. The Hours are served by their Names, who seek to become Hours themselves.

The Hours came into being through various means. Their origins inform their dominant Aspects and motivations. Some Hours began from one origin, but were later transformed through another.

There are a total of 36 Hours who have existed throughout the histories. Thus far, 30 Hours have been identified, and of these 24 are extant and 6 are dead, leaving 6 more extant Hours yet to be identified. Below are listed all known Hours by the hour of the day they are associated with, represented by a Roman numeral. For example, Hour 0 is 12:00 midnight, XII is 12:00 noon, and XX is 8:00 pm. The six dead Hours (⁂) do not have numbers. Three additional entities (‡) are possibly extant Hours, but information about them is so thin that their status cannot be determined with certainty.